namR at European AI for Finance 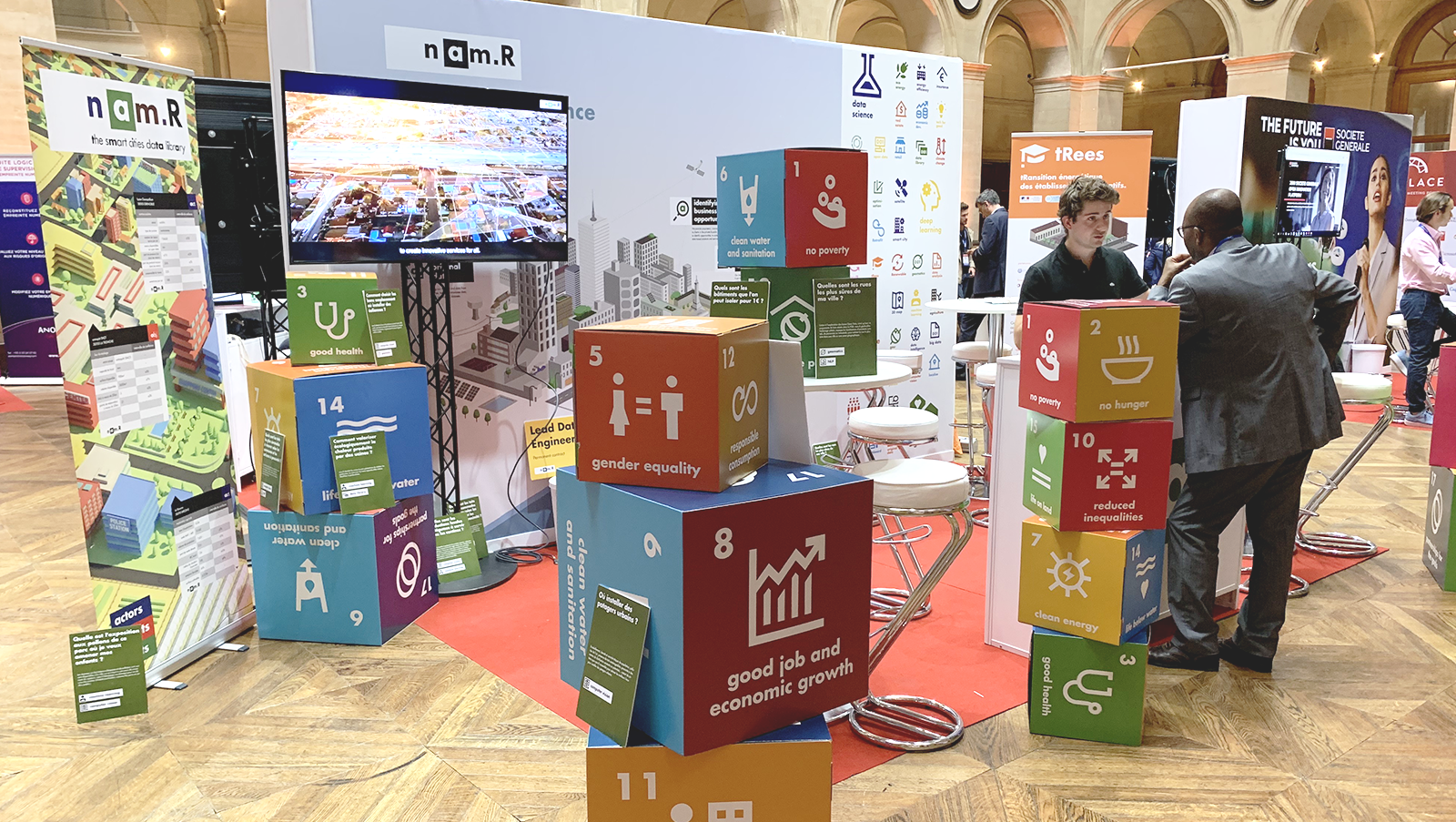 “Time to be concrete”

namR was at Ai for finance, a unique opportunity of networking at the european scale for all the actors of the AI in finance, the fintech meeting of the reopening season had as topic: “Time to be concrete”.

Something concrete for this 6 hours long event gathering 78 speakers, arranging 12 masterclasses dedicated to artificial intelligence in finance and giving the possibility to meet some thirty start-ups of the domain on their stalls.

namR was one of them. Our team was honoured to connect with the audience on the problematics and opportunities of artificial intelligence in finance, on the place and the usage of datas, on the solutions enabling to drive this sector in the process of ecological transition and reduced its impact on the environnement.

The participants had the occasion to attend the conferences of Carlo Purassanta, President of Microsoft France, of Damien Gromier, CEO & Co-founder of Startup Inside, of Bibi Ndiaye, Director of Innovation & Data Intelligence BPCE and were able to reunite again by the end of the day with Gregory Labrousse, president and founder of namR, Bettina Laville, Emmanuel Bacry and Jean-Michel Beacco for a roundtable on the topic “Ai for Green Finance“.

Bettina Laville, State councillor, questionned by Damien Gromier about the relationship between climate and finance reminded us the severity of the ongoing ecological disaster not seriously taken in account these past years.

She insisted on the urgency to consider the benefits of action on the economical and environmental levels (reduction of the greenhouse effect, of pollution…), for as the Stern report underlines it, if inaction is costly, action, represents a genuine opportunity for all.

It’s about mobilising massive financings, of course, but they are necessary.

Stern emphasizes in his 2018 report that the impact of climate warming on the economy of a country can cost 1 to 20% its GDP.

So to act in order not to exceed 2° of temperature increase in the ongoing century would cost only 1% of the world GDP, against 4% according to the worst pattern that forecasts a climate warming of 5 or 6°.

According to Bettina Laville, it is necessary to take over the new opportunities offered by artificial intelligence that, she suggested, is an extraordinary factor of acceleration, in the economic sectors in order to face the risks of geopolitical, economical and financial destabilization and reach the 17 SDGs (Sustainable Development Goals) settled by the UN of which the 17th, reminds that “Partnerships for the achievement of objectives” concern financing partnerships.

Jean-Michel Beacco, General Director of the Louis Bachelier Institute was able to state during the roundtable that, he considers artificial intelligence and the data as add-ons of human being and not substitutes. By the way he prefers the term “increased” intelligence to that of “artificial” intelligence.

“In economy and finance, datas and algorithms allow to pass from micro to macro »

The datas bring the concrete to the sectors of economy and finance. Jean-Michel Beacco explained that the economical or financial opened datas crossover with very accurate datas on sustainable development or social datas allow fro example for a banker to achieve accurate financing for an energetic renovation with a risk control more efficient.

It’s on these crossovers and on these datas utilisations that scholars and data scientists of the Louis Bachelier Data Lab work.

Emmanuel Bacry, co-founder of namR and Chief Scientific Office of Health Data Hub spoke out on the possible creation of a Planet Data Hub that would become the platform of all the opened environmental datas available in the world and could be use for green finance.

His position at the Health Data Hub allows him to emphasizes two important challenges:

“namR could be the foundation stone of a Planet Data Hub”

Gregory Labrousse, founder gave an example of the implementation of the skills of our start-up in finance and insurance: the datas created from open data allow to qualify bank assets, to determine their potential, to redirect them, to give value back to them and more.